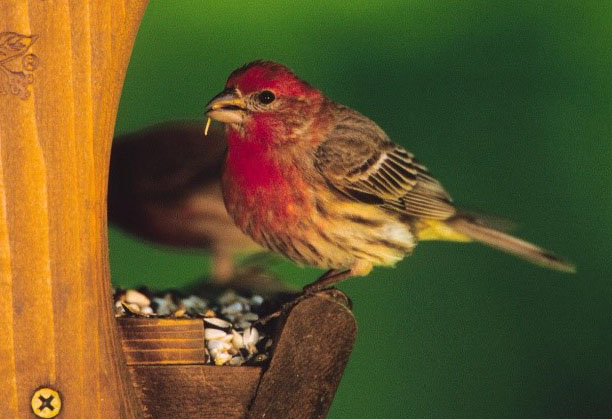 As many of you know, I am an avid birdwatcher. Before retiring, I wrote monthly articles and blogs about bird feeding, birds, and other wildlife. Recently, I have received requests to do this again. Over the next months, I’ll be doing just that.

I’m starting with house finches because they are common throughout the United States.

The house finch has not always been found in the eastern United States. In 1940, they were illegally captured in California and imported to New York by pet dealers. Fearing prosecution, the dealers released their “Hollywood Finches” on Long Island in 1940. Since then the finches have spread to all corners of the East and have even rejoined their relatives in the West.

Populations of house finches found east of the Rockies are rarely found far from urban or suburban areas, but in its native western range they may also be found in a wide variety of open or semi-open habitats including undisturbed deserts.

Male house finches display a wide variety of plumage coloration ranging from gray to bright crimson. The coloration comes from carotenoid pigments found in some wild foods. The more pigment present in the foods eaten when they are molting new feathers … the redder the male. Female house finches prefer to mate with the reddest males they can find.

House finches are early nesters, beginning in March in most of the country. Both male and female house finch display a strong tendency to return to the same area to breed, often occupying the same nest site as the previous year. House finches rarely use birdhouses; instead they seem to prefer locations such as coniferous trees, cactus plants, ledges, street lamps, ivy on buildings and hanging planters. Typically, they produce at least two broods each nesting season.

A water source can be a strong attractant for house finches. They can drink up to 40% of their body weight on a hot summer day. Also fond of nectar, they can become a nuisance at hummingbird feeders. If they do, offer them a dish of nectar for their own use.

House finches’ diets are the most vegetarian of any North American bird; approximately 97% of their diet is made up of vegetable matter including buds, seeds, and fruits. Strongly attracted to feeders, they prefer sunflower or safflower seeds. They will also eat at thistle seed feeders.

Unlike most other seed-eating birds, finches do not switch to an insect diet during the summer nesting season. They continue to eat mostly seeds, although they will occasionally prey on some insects when they are abundant.

Banding studies show house finches may live to be over 11 years old in the wild.

Have you seen house finches in your yard?