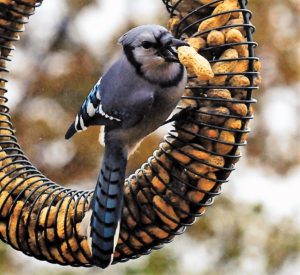 Blue jays are some of the most intelligent and brightly colored birds in your backyard. Not to mention some of the noisiest. Their raucous “jay! jay!” is probably their most familiar call and one that is easily identifiable. However, they also make a variety of more musical sounds, and, when distressed by predators or other perceived dangers, they can do a pretty good imitation of a red-tailed hawk. 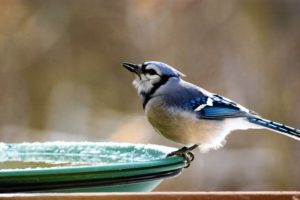 A very adaptable species, the blue jay is found in habitats ranging from oak and pine woods to wooded areas of cities, suburban gardens and rural groves. In our area, they are year round residents. They are omnivorous, with most of their diet being made up of plant matter. Consequently, they are easily attracted to birdfeeders with peanuts, almonds, sunflower and/or safflower seeds. Peanuts in the shell are a favorite. Often a jay will pick up a peanut and shake it to see if it is full or empty. If full, the bird will pound hard on the shell with its bill to open it. Jays also will store nuts in the ground. They will select only undamaged nuts for burial, avoiding the 90% that would not germinate due to insect or other damage. 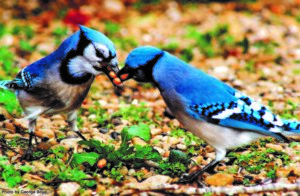 Blue jays are a species in which the male and female plumage is identical. The variations of blue in their feathers are among the most beautiful colors in the avian world. The occasional black stripes, white belly and crest on the head add to the distinctive look. 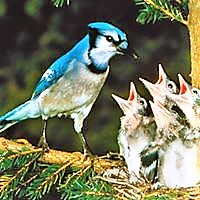 Monogamous in their mating behavior, blue jays often mate for life. The nest is built by both male and female, usually in the fork of a tree, about eight to thirty feet above the ground. The female lays 3-7 eggs. Both parents bring food to the nestlings. Blue jays are surprisingly quiet and inconspicuous in the vicinity of the nest. However, after the babies fledge, the racket begins in earnest, as the young birds demand food from their parents, even when they are nearly indistinguishable in size from the adult birds.

Blue jays bring bright, beautiful color to dull and dreary frozen backyards, so try putting out some unsalted in-shell peanuts to attract them. You’ll enjoy watching these lively birds during the winter.