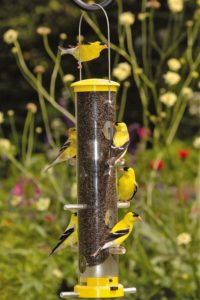 Often referred to as “wild canaries,” Goldfinches are actually in the finch family. American Goldfinches, those found in the Omaha area, and Lesser Goldfinches, are the two types found in North America.

In flight, Goldfinches have a distinct dipping pattern. They also have a unique flight call with four syllables that can be likened to “potato chip.” Frequent visitors to feeders, Goldfinches prefer thistle and sunflower seed. They will even feed on upside-down finch feeders. However, later in the summer, when much natural food is available, they often prefer to feed in the wild.

Although attracted to sunflower heads, they often can be found on coneflowers or cosmos that have gone to seed. Therefore, it is a good idea not to deadhead these species of flowers. Goldfinches will cling to them and sway with the plant in windy conditions and can hang acrobatically upside-down to reach the treasured seeds. 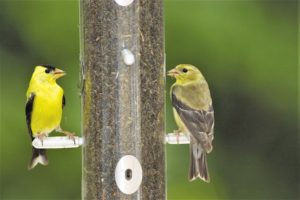 One of the latest breeding songbirds, the Goldfinch waits until mid-to-late summer to nest. Thistle seeds and down are readily available for feeding young and nest-building. A Goldfinch weaves its nest of plant fibers so tightly that it will hold water, then lines it with thistledown. Preferred nesting habitats are trees and shrubs, near open areas that support growth of thistle and other prairie plants, with a water source close by.

Nests are built four to ten feet off the ground. Sometimes Goldfinches will nest in loose colonies. They usually lay five blue or greenish-blue eggs. The eggs hatch in about twelve days. Babies fledge about twelve days after hatching. 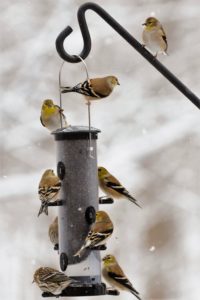 These hardy little birds do not migrate, but they do molt the brightly colored feathers of summer. Winter plumage is much drabber, brownish-green in color, making Goldfinches less visible to predators. In the spring, male Goldfinches molt into their bright yellow summer plumage. This, along with the black wings with the white stripe, black and white tail feathers, and black “cap” on top of the head, give them a striking appearance that is hard to miss.

The oldest banded American Goldfinch recaptured in the wild had lived ten years and nine months. It was caught and released in Maryland.