Although bats are among the most beneficial of mammals, they are much maligned in folklore and the media. Because of this unwarranted reputation, or perhaps because they are unfamiliar creatures of the night, bats are frequently feared. 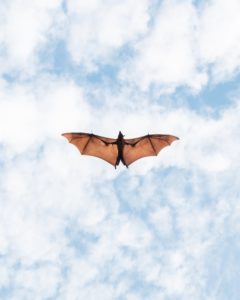 Each night a bat eats nearly its own body weight in insects, making bats the major predators of night-flying insects in our area. Bats can eat up to 1000 mosquitoes per hour – roughly 6000 insects per night. In the tropics, fruit bats pollinate and disperse seeds for most of the rain forest plants.

Bats are unique. They are the only mammals capable of true flight. (“Flying” squirrels only glide.) Similar to the human hand, the bat’s wing is made up of a thumb and four elongated fingers, with membranes between them. 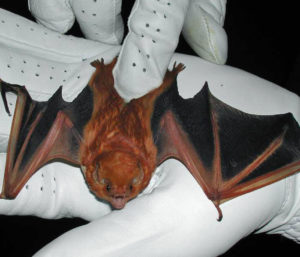 Although they can see fairly well, bats depend on echolocation, an ultrasonic sonar capability, to navigate and locate small insects. Echolocation is the same system dolphins and whales use to navigate in dark ocean waters. The bat emits a high frequency sound and the sound waves travel until they hit an object. Then the sound waves bounce back to the bat’s ears, giving it a reference point regarding its surroundings in total darkness.

Many bats mate in the fall, before going into hibernation. Because of delayed implantation, the female will not become pregnant until the following spring. Gestation lasts from thirty to sixty days. Pregnant females move from hibernating sites to warmer roosts. There they form nursery colonies, often consisting of 100 to 200 mothers and young per colony, sometimes up to 800.

Mother bats typically have one or two pups per year. They will nurse their young until the pups are old enough to fly, then teach them to hunt for food. Colony bats, like the Big Brown and Little Brown, usually hibernate from late October until early April in caves, houses, or other structures where the temperature does not fall below freezing. Most bats will travel less than three hundred miles to find a suitable location in which to hibernate. Solitary bats, like the Red Bat, migrate south to areas in which temperatures rarely drop below freezing. 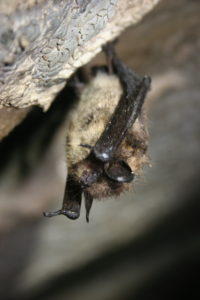 Fourteen species of bats have been found in Nebraska, with the Big Brown and Little Brown being the most common in our area. All of Nebraska’s bats are insectivores, feeding on a variety of night-flying insects. They use a variety of roosting sites, including dead trees, leafy trees, buildings, and caves. Colony bats will often use bat houses, erected by people who want to invite these amazing creatures into their yards. By the end of October, most bats will have either gone into hibernation or migrated, so watch now at dusk for the distinctive flight pattern of the bat. As we learn more about the lives of bats, we can discard the negative notions of folklore and come to appreciate these natural bug-zappers.