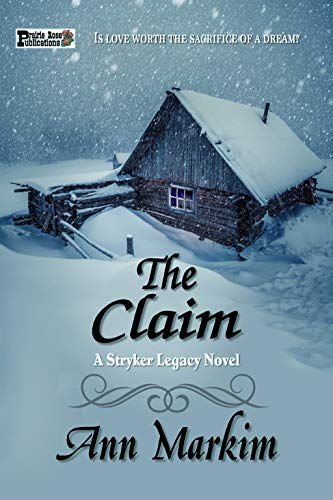 Erik Stryker is determined to make his mark in the world on his own, by establishing a brewing and distilling business in the Yukon. After striking gold in 1896, Erik continues to mine but spends his time and energy pursuing his dream—expanding his beloved spirits business.

Katie Garrick is a beautiful young actress and singer from San Francisco who arrives in the Klondike alone, expecting to marry the unscrupulous suitor who has sent for her—but she is not the only bride-to-be he’s sent for! Now, Katie’s choices are limited—become a prostitute to survive, or work on the mining claim for Erik’s partner and his wife.

As Katie and Erik work together in the harsh conditions, they discover a respect and passion for each other as challenging as the life they have built on the claim. But when Katie can finally afford to return to her beloved San Francisco, will Erik be able to give up all he’s worked for? Is love worth the sacrifice of a dream?

Will held up a rifle. “Ya know how to shoot a gun?”

Katie shook her head. “I’ve pretended to shoot pistols in some of the plays I starred in, but I’ve never really used one.”

He emitted a disappointed growl.

Will picked up the new crate and an old one and carried them outside.

The sound of men’s voices wafted through the door.

She rejoined Millie at the cookstove. “Is it hard to shoot a rifle?”

“Nah.” She stirred the pot, which was releasing a fragrant steam that made Katie’s mouth water. “You just have to practice ‘til you can hit what you’re aimin’ at.”

“Pick up that table,” Erik told his new employees. “We’ll carry it over to the Randolphs’.”

He gathered three tin bowls, spoons and mugs then held the tent flap for the men. When they had passed through, he led them to his partner’s cabin.

Will met them on the path. “Was just comin’ to have ya bring that.”

“You guys set the table over there, and go back and get the barrels so we’ll have something to sit on.” He set the utensils on the table and turned to Will. “Are you planning to have that girl live in the big tent? She can’t live in the bunkhouse with the men.”

“Millie wants her to stay with us ‘til ya can build her a cabin of her own.”