In addition to our year-round finches, the House Finch and the American Goldfinch, winter often brings more species of finches into our area. Irruptive migrations of Pine Siskins, Common Redpolls, and Purple finches typically occur every two to three years or so.

Common Redpolls are small brown-streaked birds with a reddish spot on top of their heads. They have tiny yellow bills and appear to be rather fluffy. The male usually has extensive deep pink color on his chest, while the female has none. Birch thickets and weedy fields are common places to find them.

A Common Redpoll will quickly gather numerous whole seeds and store them in an expandable section of its throat called the diverticulum. Once the bird has flown to the safety of dense cover, it will regurgitate the whole seed, husk it, and re-swallow the nut meat. It will also fill the diverticulum with seed just before darkness in order to provide an extra source of energy to help it survive the night. A study in Alaska documented that Common Redpolls could survive temperatures of sixty-five degrees below zero. 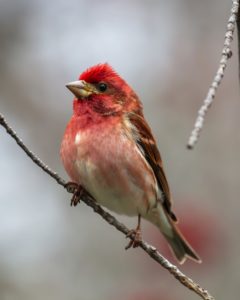 Purple finches may be found in small flocks in shrubs or open woods. Unlike the House Finch, the male Purple Finch has extensive red color on its head and back. During the winter, Purple Finches will often forage and roost with mixed flocks of Pine Siskin and American Goldfinch. In these flocks the Purple Finch are socially dominant over the Goldfinch, but subordinate to the Pine Siskin. They will visit birdfeeders, but competition with House Finches and House Sparrows may drive them back into the woods. 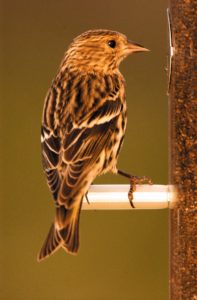 Pine Siskins look like Goldfinches disguised as sparrows, with their predominantly brown and white color with darker brown striping. Males sport yellow wing bars. They are found mainly in open coniferous forests or fields of thistle or sunflower. Primarily seed eaters, they will sometimes hang upside down to reach choice seeds. In winter, they often flock with Goldfinches and visit birdfeeders.    Their winter migration patterns are very erratic, coming south in great numbers some years and very scarce in other years. 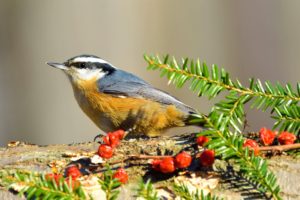 Red-breasted nuthatches, although not finches, are also here many winters. These small birds, about the size of chickadees, have bluish to brownish gray backs and a white belly with a band of rufous between. The head is distinctive, with a black stripe through the eye, making the birds appear to be little bandits when they snatch a seed from your feeder and fly off with it.

So look closely at your feeders this winter and you might just find some visiting winter finches and red-breasted nuthatches.