On velvet wings of black and orange, a Monarch silently flutters by. Just looking at this delicate creature, it’s hard to imagine the amazing metamorphosis and the perilous annual migration, which are necessary for preservation of the species. 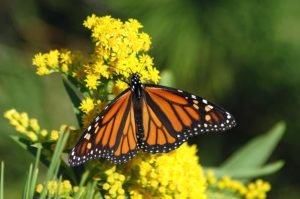 Image by Bill Barlow from Pixabay

Like other butterflies, the life cycle (or metamorphosis) of the Monarch involves four stages: egg, larva, pupa and adult. Adult females usually lay single eggs on the bottom side of a milkweed leaf, near the top of the plant. In two to five weeks of egg-laying Monarchs lay an average of 700 eggs. 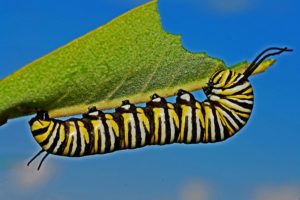 Eggs hatch about four days after they are laid. The black, yellow and white larva, or caterpillar, feeds on the milkweed plant. In addition to its six actual legs, the larva usually has five pairs of false legs, each with a tiny hook to hold the larva on the leaf. Although it has six pairs of eyes, its vision is poor. In two to three weeks, the caterpillar spins a silk pad, usually on the underside of the leaf. The larva then splits its exoskeleton and the pupa attaches to the pad. 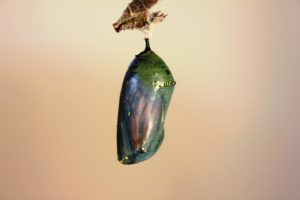 The pupa, or chrysalis, dries to a jade green with a gold crown. It will transform into an adult in five to fifteen days, with the exterior becoming transparent about twenty-four hours before the butterfly emerges. Adult Monarchs normally live two to six weeks in summer.

However, migrating Monarchs undergo a chemical change that delays their maturity and allows them to live all winter – six to nine months. It is believed that a combination of temperature and hours of daily light trigger migration. Scientists consider the Continental Divide too high for butterflies to fly over, so they divide migrating Monarchs into two groups, Eastern and Western. 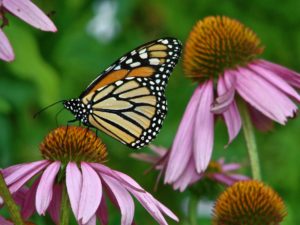 Monarchs migrating to Mexico over winter in the Oyamel fir forests. Cool, but not freezing, temperatures cause the butterflies to hibernate. They hibernate, one on top of another in large layer-like cluster. This provides the cold-blooded insects with some safety from freezing temperatures – those on the outside might die, but those on the inside are protected.

As spring warms the Northern Hemisphere, the survivors begin their journey northward. Next time a Monarch butterfly floats effortlessly by on a gentle breeze, enjoy its beauty and think about the miraculous metamorphosis and migration so necessary for its existence.

For more information and to find maps that follow the Monarch migration, check out the Journey North website. https://journeynorth.org/monarchs   Be sure to click on the Maps icon to find maps of many other migrating species.