Wrens are small birds with loud, often complex, songs. Predominantly brown in color, they have narrow heads, with thin, down-turned bills for probing crevices for food. Their wings are short and rounded; this causes them to have a quick and erratic flight pattern. 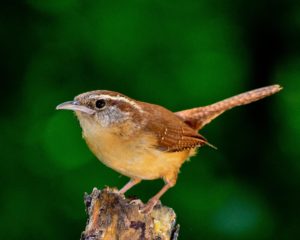 Since the mid 1900’s, rising temperatures have aided the northward expansion of Carolina Wrens. They do not migrate, and are sensitive to cold. Therefore, unusually severe winters may substantially decrease northern populations.

Insects make up the primary diet of Carolina Wrens. They will often eat berries and small fruits, especially in winter. Unlike House Wrens, they also eat seeds and will often visit bird feeders, especially for peanuts, seeds, and suet.

Carolina Wrens are truly monogamous, keeping the same mate for life. They usually nest twice a year, but occasionally will nest three times. Nests of Carolina Wrens have been reported in a variety of nooks and crannies, in, around, or under buildings, under bridges, or in holes in any structure such as a porch, flower pot, fence post, tree house, or barn.

Females normally lay four to six eggs over a period of several days. The eggs are grayish-white, sprinkled with reddish-brown spots. Only the female incubates the eggs, which takes 12-14 days. Both males and females feed the young. The young leave the nest 12-14 days after hatching.

I routinely have Carolina Wrens at feeders, especially in winter. Their numbers have been increasing in the Omaha area over the past few years. 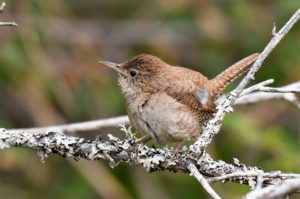 House Wrens are migratory. They prefer semi-open habitat, including open woods, thickets, towns, and suburban gardens. House Wrens nest in unoccupied woodpecker holes, tree cavities, and even abandoned hornet nests. They will also use nesting boxes and other human-made nesting sites. A male may claim several nesting cavities by putting twigs inside. The female chooses the final site and takes over, adding the nest cup and lining it with grass, inner bark, hair, and feathers.

The female lays four to eight whitish eggs with reddish-brown spots, which she incubates for 13-15 days. The young are helpless, blind, and naked when they are born. They remain in the nest 12-18 days after hatching. House Wrens raise two to three broods per year.

The primary diet of House Wrens is a wide variety of insects. They also eat spiders, millipedes, and snails. In summer,

House Wrens are common here in late spring and summer. These small birds have a busy demeanor and a melodious song. This makes them a favorite of many bird lovers