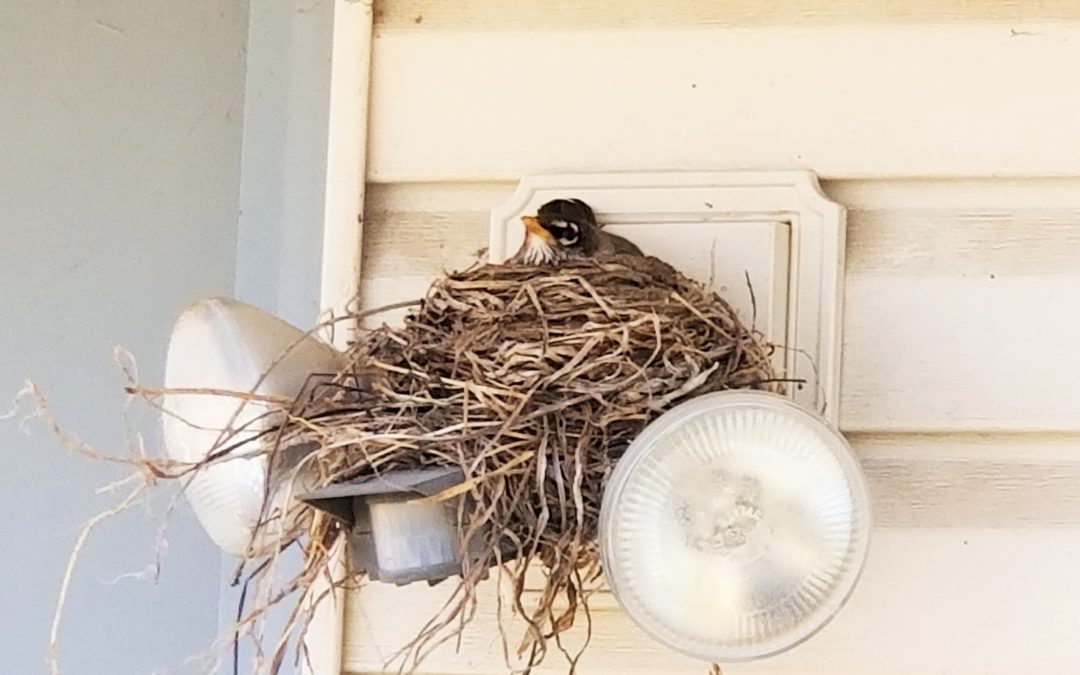 I’ve had robins in my yard all year long, but they still seem to be a sign of spring — maybe because they rarely stayed this far north in winters when I was younger. Currently, they are looking for a nesting site so I have taped the foil strips above my security light to keep them from nesting in their favorite spot. I wouldn’t mind except when they nest in that location, their movements trigger the motion-activated sensor and turn on the light frequently during the nights. 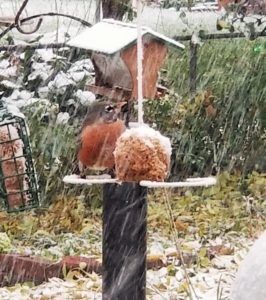 It is widely believed that all robins fly south for the winter.  In actuality some may weather the cold months as far north as Canada, flocking together so they are concentrated in smaller areas and less widely seen.  While some may return from southern climates, others return from wooded areas just a few miles away as the flocks disband for the nesting season.

Males appear on the nesting grounds before females.  Their territories range from less than half an acre to an acre.  Unlike many other species, their territories may overlap.  The male defends the territory by singing and fighting.  During the nesting season, the robin’s song is often one of the earliest of the day, frequently beginning just before dawn. 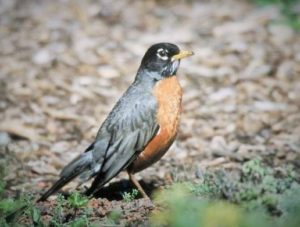 During courtship, several males may pursue the same female, but once the pairing is established they are normally (but not always) monogamous.  Although robins nest in a wide variety of locations, including ledges of human structures, they typically do not use birdhouses. The nest is cup-shaped, built of twigs, grass, mud, and miscellaneous other materials.  It is typically lined with soft plant fibers or animal fur.

Egg numbers range from three to seven, but usually there are four. Color is the familiar light blue.  Both parents feed the young.  Nestlings normally remain in the nest for thirteen to sixteen days. In a single season, robins will raise two to three broods. 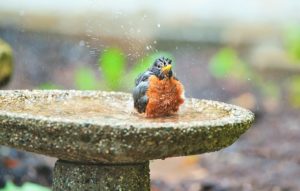 Robins’ diets consist of earthworms, insects, spiders, caterpillars and many fruits and berries. Although they rarely visit seed feeders, you can entice them to fruit feeders with apples, cherries, grapes, raisins or berries. In my yard, they also frequent the suet feeders. Water sources such as birdbaths or shallow ponds attract them for drinking as well as enthusiastic, splashy bathing.  They also like misty water and are frequently seen running around the yard during light rains. Manmade sources, including misters and lawn sprinklers that simulate light, misty rain, provide inviting substitutes.

Throughout the spring and summer, when you hear the cheerful song of early birds, listen and look carefully. Robins are probably welcoming the new day.