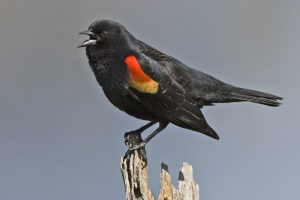 I often have red-winged blackbirds visit my yard for a day or two in the spring, and this year I had two males for only one day each. They were probably in a hurry to stake their territories for the breeding season.

In summer, Red-winged Blackbirds are commonly seen along rural roadsides. Males are easily recognized by the red markings, called “epaulets,” on their wings. The male birds flash these epaulets when defending their territory. They can also cover and hide their epaulets. This usually happens when a male is intruding on another male’s territory. Intruders often avoid territories of males with very large epaulets. 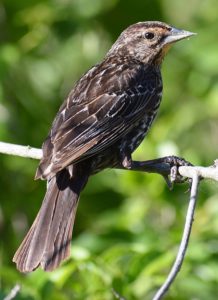 Female Red-winged Blackbirds look nothing like their male counterparts. Consequently, they are often misidentified. The female is brown-and-white streaked, with a brown bill and a light streak above each eye.

Seeds (birdseed, weed and grass seed and waste grain) make up the preponderance of Red-winged Blackbirds’ diets. They will also feed on some berries and small fruits. But during the breeding season, they eat mostly insects. 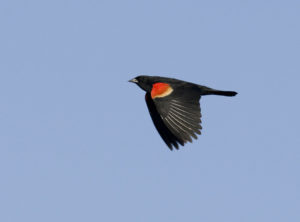 Canadian and northern U.S. Red-winged Blackbirds migrate south for the winter. Populations in the southern and western U.S. and Central America are not migratory. In winter, Red-winged Blackbirds can form huge roosts, with up to a million birds staying in one area at night. During the daytime, they will disperse up to fifty miles away from the roosting area in search of food.

Male Red-winged Blackbirds are one of the most polygamous of all bird species. As many as fifteen females have been observed to be nesting in the territory of one male, but on average a male will have approximately five females in its territory. Males fiercely defend their territories during breeding season. They do not hesitate to attack much larger animals, including people. Over a quarter of the male’s time is spent defending its territory from other males and predators. During non-breeding seasons, he spends most of his time foraging, preening and resting.

Female Red-winged Blackbirds build their nests in three to six days. They usually lay three to four eggs and incubate them for 10-12 days. Both parents tend the hatchlings. The young will leave the nest 10-14 days after hatching. Second broods are rare.

The oldest known male lived to be fifteen years, nine months, but the average lifespan is believed to be just over two years.