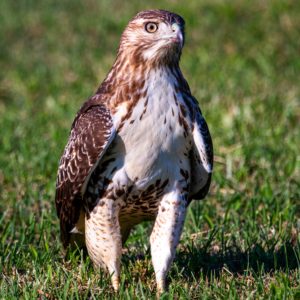 As you drive along area roadways, it is not uncommon to see a hawk sitting atop a utility pole, a road sign, a fence post or a tree. More than likely, it will be a red-tailed hawk.

This large hawk is found throughout North America in a variety of habitats. Red-tailed hawks range from 18-25 inches in length, with the female being slightly larger than the male. Their wingspan can reach four feet. Feather coloring is highly variable, ranging from chocolate brown to nearly all white. Often they are brown with a white breast and a distinctive brown stippled band across the abdomen. The rusty red tail that gives the hawk its name is usually seen only when it is flying overhead. Juvenile birds develop the red tail in their second year.

Common food sources for the red-tailed hawk are mice and other small mammals, birds, snakes, and insects. Adapted for daytime hunting, the red-tailed hawk’s eyes are positioned at the front of the face, giving it binocular vision and excellent depth perception. Once prey is spotted, the hawk will usually launch itself from its perch and glide silently toward its target on open wings. When it is nearly directly above its intended victim, it will fold it’s wings and drop rapidly. Strong leg muscles and feet with four long, curved, sharp talons enable these birds to capture and immobilize their prey. 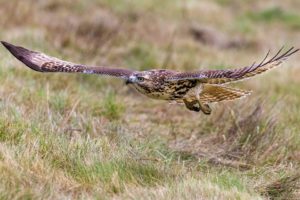 The strongly hooked raptor bill is extremely sharp for tearing the flesh of its prey. If necessary, the hawk will flap its wings and give chase for a few seconds. If the prey is not captured soon after the chase begins, it has a good chance of escaping.

Red-tailed hawks are usually monogamous and most pairs mate for life. They generally begin establishing territories and building nests by early March. The nest is built by both male and female on a platform or tree capable of holding the 25 to 30 inch diameter structure.

The female lays two to three white eggs, sometimes marked with brown. Both parents participate in the 30 – 35 day incubation period, and feed the babies after they hatch. The young fledge in 45-46 days. The pair will raise only one brood per year.

In our area (Omaha, Nebraska), red-tailed hawks are year-round residents. Hawks from farther north may overwinter in the territories of our local population. Although winter offers fewer daylight hours for hunting, much of the vegetation hours for hunting, much of the vegetation that provides protection for prey in other seasons is absent in winter. Food is critical for these birds to maintain the body temperatures necessary for survival.

Heat loss is often reduced by lifting feathers to trap a layer of warm air near the body. This gives the bird a fluffy or stocky appearance. Additionally, protected roost sites are critical. On cold, windy nights they tend to roost near the trunks of trees with dense branches or in evergreens.

Next time you’re out for a drive, watch for these regal roadside sentries. You might even be rewarded with a display of their hunting prowess.