Long ago, native Americans hung up hollowed-out gourds to attract nesting Purple Martins. To­day, we erect apart­ments in the sky or groups of plastic gourds for the same purpose. And over time, these beautiful birds have developed a relation­ship with humans unlike that of any other backyard bird species. 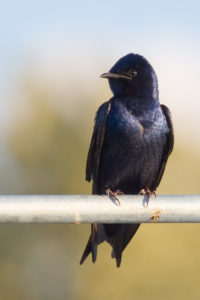 Purple Martins are the largest members of the swallow family. Adult males are a uniform purplish black and may appear all black in some light. In direct sunlight they appear an iridescent purple to dark blue.

The adult female has similar coloring on her back and wings, but has a gray forehead and chest and a white belly. Purple Martins do not obtain their adult plumage until they are two years old.

New Purple Martin landlords are most likely to attract sub­adults, birds in their first breeding season. One-year-old females look like adult females except their undertail covert feathers are all white; in adults, they are white with gray centers. The sub­adult male looks like a subadult female, but has a dark throat and patches of dark feathers on his chest and belly.

Purple Martins like to nest in the open, so it is important to place the house at least 40 feet, but preferably farther away from the nearest tall tree. You will increase the likelihood of nesting in your house if it’s between 40 and 100 feet from your home. A house placed too far from human activity may go unused. 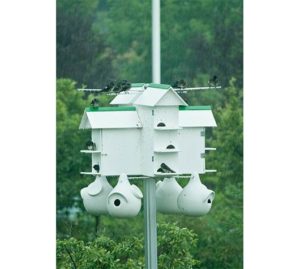 It is advantageous to use a house specially designed for Purple Martins, with multiple compartments each having an entrance of 2 1/8 inches and adequate ventilation. The house should be mounted 15 – 25 feet above the ground. Because it is important to clean and maintain the house, mounting it on a telescoping pole or with a winch/rope and pulley system is a good idea for ease of access.

In spring, scout Purple Martins usually return to our area (Omaha, NE) between March 15 and April 1. Subadults return later. Through­out the summer, martins eat flying insects with a preference for larger prey such as dragonflies, wasps, mayflies, moths, and but­terflies that fly above 100 feet in the air. Contrary to popular belief, mosquitoes make up only a small portion of their diets.

As fall approaches, Purple Martins will leave us for the winter warmth of South America, mainly Brazil, where insects are plentiful.