That owls are “wise” may be a myth, unless you define “wise” as being accomplished in night hunting. With their hooked bills and sharp talons, they are similar to other birds that hunt, such as hawks and eagles, but there are striking differences that make owls the perfect nocturnal predators.

While most birds have eyes at the sides of their heads, the owl’s eyes face forward. Their eyes have many receptors in the retina which give them excellent vision in low light as well as daylight. 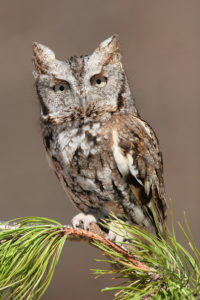 An owl’s keen sense of hearing is another advantage at night. Because it’s ear opening is higher on one side of its head than the opening on the other side, an owl can judge the direction of sound both vertically and horizontally. The feathers around its face are thought to help funnel sound into the ear openings.

Another advantage owls have is their nearly silent movement. The leading feather of each wing has a serrated edge and the rest of the flight feathers have soft edges too. This, along with the fluffy body feathers, greatly muffles the sound of their flight as they swoop down on unsuspecting prey.

Although all owls are predators, not all are nocturnal. For example, Burrowing Owls routinely hunt during the day. The three most common species in our area, Great Horned, Barred, and Screech, all hunt primarily at night.

Choice of prey varies with the size of the owl. Large owls, like the Great Horned, will hunt animals as large as rabbits, skunks, or geese. Small owls, like the Screech, live mainly on insects, frogs, mice, and other small prey. As the owl feeds, the indigestible parts of its meal, like bones, fur, and feathers, are formed into pellets, which will later be coughed up. 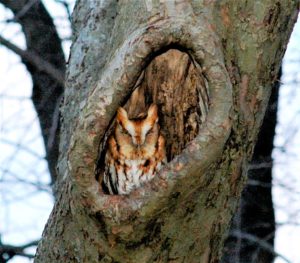 Screech owls nest in cavities, such as old woodpecker holes or natural hollows. They will also use nesting boxes, which Kenn Kaufmann, the famous ornithologist, credits with helping to slow the decline in numbers of Screech Owls in areas where the natural habitat has been destroyed. 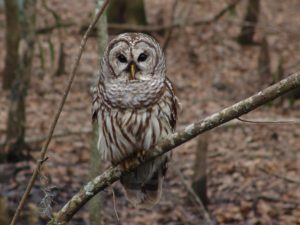 Barred Owls will nest in an old hollow tree or broken off section of a decaying tree. They will also take over an old nest of a hawk, crow, or squirrel. 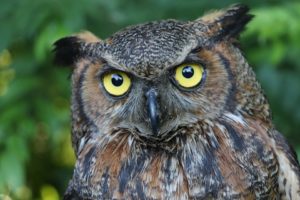 Because owls are nocturnal, they are often difficult to spot, but they are easily identified by their calls. If you hear a call that sounds like a horse, but you know there are no horses around, chances are it is the whinny call of the Screech Owl. These owls also make a distinctive trilling, tremolo call.

And the Great Horned Owl, considered the hoot owl, makes a series of “hooo” sounds of varying lengths.

All three of these owls are year-round residents of our geographical area (Omaha, Nebraska). Take a walk in the woods after dark and you might just encounter one or more of these amazing creatures of the night.