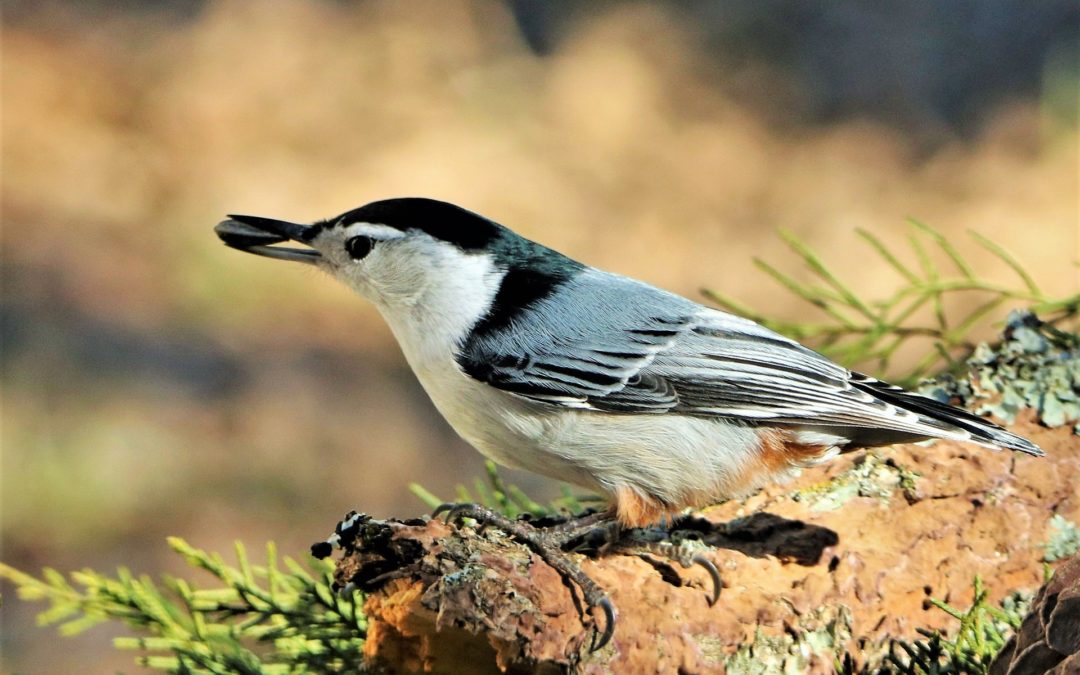 The name Nuthatch probably results from the corruption of the word “nuthack,” referring to the bird’s habit of hacking away at a seed with its beak until it opens. Nuthatches have short legs, flat bodies and large heads. Nuthatch pairs stay together throughout the year. They hoard seeds and nest in cavities.

Nuthatches have a peculiar way of creeping head first down tree trunks while searching cracks and crevices for insects to eat. A nuthatch’s foot has one big toe (the hallux) that faces backward, while its other three toes face forward. They are able to walk down the trunks of trees head first by moving one foot at a time while the hallux toe on the other foot holds firmly to the bark.

Nuthatches frequently visit birdfeeders. With larger seeds, such as sunflower, they usually select a seed then fly to a tree to eat it. They have stout bills (for pounding) that come to a point (for probing). The nuthatch cracks food open by wedging it into bark and then hammering it to pieces with its bill. Peanuts (out of the shell) and suet are also attractive to them. 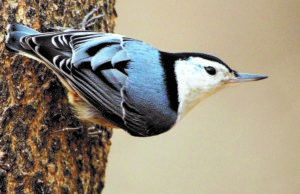 The White-breasted Nuthatch is a common visitor to birdfeeders. One study found that they selected shelled sunflower seeds approximately 25% more often than seeds still in the shell. This preference is likely driven by the fact that it takes a nuthatch about half the time to transport and cache a shelled seed than it does a seed in its shell. They’ll often store seeds for later in the same day or as a quick source of food for the next morning.

During winter, White-breasted Nuthatches will often forage together with other birds such as titmice, chickadees, and downy woodpeckers in a group known as a foraging guild. Nuthatches are able to recognize the alarm calls of these species, thus reducing their own level of alertness by relying on vigilance of other species. This leaves them with more time to focus on finding food.

However, nuthatches are monogamous and defend a territory from other nuthatches throughout the year. Female White-breasted Nuthatches rarely stray far from their mates and stay in constant vocal contact when they are more than a few yards apart. Females play the dominant role as “watchdog” when they are together, leaving the males to focus on hunting for food. 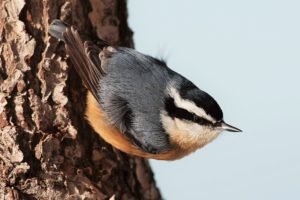 The preferred habitat of Red-breasted Nuthatches is an area with many fir and spruce trees. They line the entrance to their nesting cavities with drops of sticky conifer resin. It is thought this may be a tactic to discourage predators or nest competitors from entering the cavity. The nuthatches avoid the resin themselves by diving directly into the nesting cavity without ever touching the sides of the entry hole. Red-breasted Nuthatches very aggressively defend their nesting cavities, especially during the building period. They chase away much larger birds and have even been observed to bully  eventhe very aggressive house wren.

Red-breasted Nuthatches have been sighted this fall (2020) in the Omaha area. The Finch Research Network has indicated that these birds have been moving south since August and this is likely to be an irruption year. Watch for them at your feeders.