The size of the cardinal’s breeding territory varies with habitat quality and population density, but generally ranges from two to ten acres. During the breeding season, male cardinals may sing 200 or more songs per hour in the early morning hours. Both male and female cardinals can sing. Mated pairs will often sing duets together. 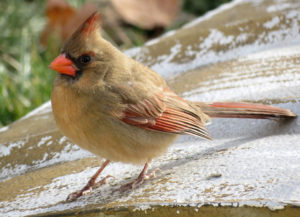 Northern Cardinals have a very low nesting success rate with only 15-37% of their nests succeeding in fledging young. The impacts of predators and egg destruction by Brown-headed Cowbirds are the major causes of nest failure.

Young Northern Cardinals have charcoal bills rather than the orange-red of the adults. Bill color gradually changes three to four months after hatching. 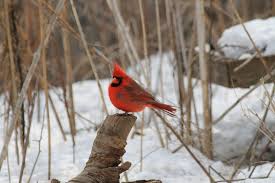 The red color of the Cardinal’s feathers is the result of pigments called carotenoids. This pigment is obtained mostly from eating fruits and insects and is deposited in their feathers as they molt, resulting in the bright red color of their new plumage. In a study conducted during the fall molting period of the Northern Cardinal, over 75% of their diet consisted of fruits and insects. This is why you may witness a reduction of North Cardinals at your feeders in the fall. Seeds are a very poor source of carotenoids and are only occasionally eaten while they are molting.

Research has shown that male Northern Cardinals with brighter levels of red plumage provide better parental care for their young and successfully fledge a higher percent of them. This probably correlates to the fact that they also select and maintain breeding territories that have the greatest amount and diversity of food sources. 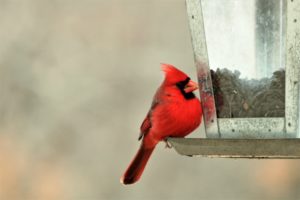 Because Cardinals are mainly ground feeders, deep snow may severely affect their ability to feed. Winter birdfeeding probably helps Cardinals in their northern range to survive deep snow conditions. The ability for cardinals to digest food varies with the temperature. Studies have shown that digestion efficiency rates are 16% higher at 77º F than at 32º F. This suggests that cardinals must consume substantially more food during cold weather, especially when temperatures are below freezing. Northern Cardinals will visit feeders at any time of day but are typically the most numerous at dusk or dawn and are often the first and last birds at the feeders. 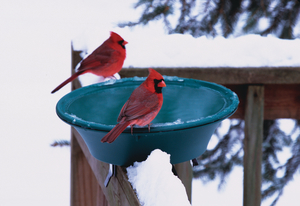