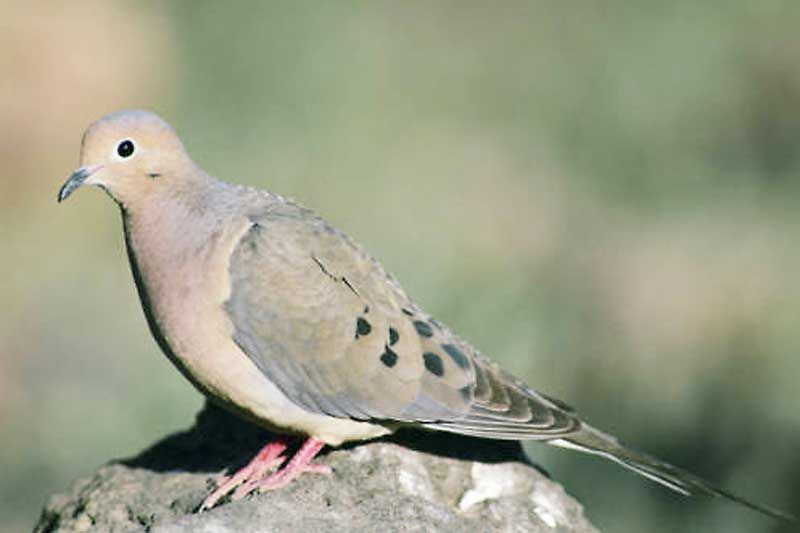 The mournful cooing sound of the Mourning Dove is probably responsible for its name. Often heard before dawn and dusk, the call is often mistaken for that of an owl.

Most often found on the ground, the browns, grays, and black of their feathers help them blend into their surroundings. They have been clocked at flying speeds between 40-55 mph. 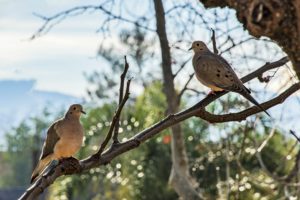 Male and female Mourning Doves look very similar, but the male is slightly larger and has a noticeable green tinge to his neck feathers, especially when he is in full sun.

Ninety-nine percent of their diet is made up of seeds, which they forage on the ground. Occasionally they may eat snails and, more rarely, insects. The Mourning Dove’s large crop enables it to feed on a large quantity of seeds in a short amount of time, thus limiting the amount of time it is vulnerable to predators. The crop of one Mourning Dove was found to contain over 17,000 individual annual bluegrass seeds.

Doves are one of the few species of birds that drink by sucking up their water instead of taking a bill full of water and letting it trickle down their throat. It can suck up its total daily requirement in less than 20 seconds.

Mourning Doves are known to be monogamous for an entire breeding season, and there is some evidence that they may re-pair in succeeding breeding seasons. Their nests are woven  together by the  female. 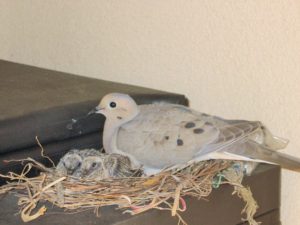 In warm climates, Mourning Doves may have up to six clutches per year, with a typical clutch size of two eggs. The female Mourning Dove usually incubates her eggs from late afternoon until midmorning, then the male comes to take his turn during the heat of the day.

Both Mourning Dove parents feed their young on crop milk, a yogurt-like secretion produced by the walls of their crop. It takes both parents to provide enough food for the growing nestlings. If one parent is lost during the nestling’s first seven days, the young will not be able to survive on the food produced by the lone remaining adult.

Some Mourning Doves will stay in our area throughout the winter, but many will move south in the fall. You can attract them to your ground feeder, or sometimes tray feeder, with sunflower, safflower, white millet, or niger/thistle seeds.