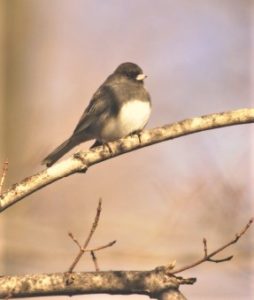 Dark-eyed Juncos are often called Snowbirds, and many people believe their return from northern breeding grounds foretells winter’s cold, snowy weather. Even its white belly plumage and slate-colored back reminds one of a winter scene with its leaden sky above and snow below. Pictured above is the Slate-colored variety of dark-eyed Juncos. In our area (Omaha, Nebraska) it is not uncommon to also find the Oregon variety, which have pinkish-brown flanks   and may have brown in their side and back feathers. Juncos have over 30% more feathers (by weight) in the winter than they do in summer. 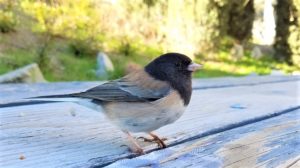 Juncos migrate at night at very low altitudes and are susceptible to collisions with communication towers and other structures.

To avoid the competition for territory, many female juncos migrate earlier and go farther south than most of the males. Males tend to spend the winter farther north in order to shorten their spring migration and gain the advantage of arriving first at prime breeding territories.

Juncos often return to the same area each winter. Chances are that you have many of the same birds at your feeder this winter that you had in previous years. They spend the entire winter in flocks averaging in size from six to thirty or more birds and will usually remain within an area of about ten acres during their entire winter stay. Current estimates place the junco second only to the American Robin in overall population size in North America. 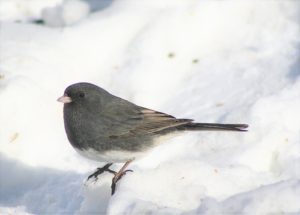 A study in New Hampshire on the foraging habitats of the Slate-colored Juncos found that they spent over 65% their time on the ground, 20% in shrubs, 16% in saplings or low trees. They were never observed in the canopy of large trees. They prefer to roost in evergreens at night, but will also use tall grasses and brush piles. They return to the same roost location repeatedly, sharing it with other flock mates, but they do not huddle together.

Like many other members of the sparrow family, they are primarily ground feeders and are drawn to the white millet and mixed seeds around the base of your feeders. They bring life to our yards in winter, but usually leave in March to go north to their summer breeding grounds