Chickadees are easily identified by their namesake call, “Chickadee-dee-dee.” They use this call in a variety of ways, including warning of predators. A report in Science indicated that Chickadees have a very sophisticated signaling system.

A study at the University of Washington indicated that chickadees use a soft, high-pitched “seet” call to warn of flying predators such as hawks and owls. However, they use a loud form of their “Chickadee-dee-dee” call to warn of a stationary predator and recruit other chickadees and other bird species to mob and harass the threat. The study indicated that chickadees assess the threat based on body size and species. The more dangerous the threat, the more “dees” are added to the end of the call, with a range of 10 to more than 20 in the event of a severe threat.

Because chickadees are so closely associated with the call that sounds like their name, people are often surprised to learn they make other calls as well. One that is particularly common is the two note (the second note lower than the first) “fee-bee” call. 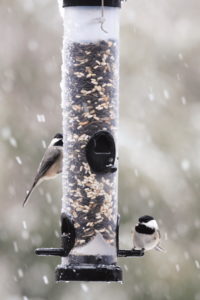 In our area (Omaha, NE), the Black-capped Chickadee (pictured) is a year-round resident. They are found in areas of open deciduous woods, forest edges, or suburban areas with mature deciduous trees. They feed mostly on insects, seeds, and berries. They are easily attracted to birdfeeders. Sunflower, safflower, peanuts (out of the shell), and seed blends that have fruit in them are especially attractive to Chickadees. They also like suet, especially with a fruit and nut combination in it.

Chickadees have been found to need 20 times more food in winter than they do in summer. They can gain as much as 10% of their body weight each day and lose it all again during a cold winter night. Providing bird food and open water can substantially improve their ability to survive a cold winter.

Chickadee pairs are monogamous, and usually mate for life. They may join a flock in winter, but will break away in spring to find a nesting territory, which both male and female will defend. They are cavity-nesters and will seek a hole in a tree or a bird house as the place to build their nest and raise their young.

The female builds the nest and often lines it with soft material such as animal hair. She usually lays 6-8 eggs and covers them with nesting material when she leaves the nest. The male often brings food to the female during incubation and to the young when they first hatch. Later, both parents will feed them. They normally have one brood per year.

Banding studies have shown that Black-capped Chickadees can live to be twelve years old, but their average life span is probably half of that.

These tiny birds are fun to watch at seed and suet feeders, but keep your eyes open, because they don’t stay long. Once the select the seed they want, they will carry it away to eat it.