Bluebirds enchant us with their lovely colors and sweet songs. This may explain why we associate bluebirds with happiness, love, and spring. Poetry, prose, and lyrics extol the virtues of these warm weather visitors. 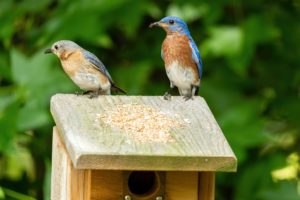 East of the Rocky Mountains, the Eastern Bluebird is the species we are most likely to see. The male has a bright, deep-blue back, which prompted Henry David Thoreau to note, “The bluebird carries the sky on his back.” In contrast, his breast is robin-red and his belly is white. The female’s upper parts are a dull blue-gray, with blue only on the wings and tail. Her breast is a lighter reddish brown continuing to the white belly. Both genders have black bills and legs. Often confused with blue jays, Eastern Bluebirds have different coloring and are much smaller.

Bluebirds tend to be country dwellers, preferring fields or other large open areas. Pastures, extensive lawns, cemeteries, golf courses, parks and other large areas with short vegetation provide the perfect habitat for them and their favorite food: insects. 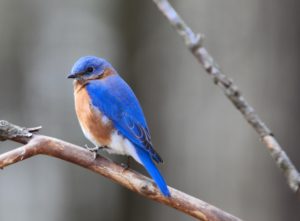 Although insects are their food of choice, bluebirds often supplement their diets with raisins, nutmeats, sunflower chips, mealworms, and specially-prepared foods. They can be attracted to special feeders that have been designed to make it difficult for large birds to reach the food. For best results the feeder should be placed in a visible area that the birds frequent for food. 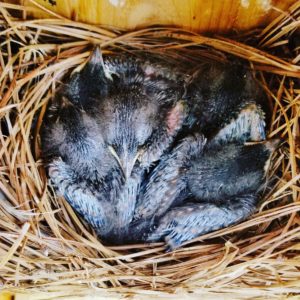 Baby bluebirds in next box – photo by Nancy Hann

Nesting boxes specially designed for bluebirds can often attract mating pairs if located in their preferred habitat. They should be placed away from heavily wooded areas to reduce the likelihood of use by wrens and chickadees. Mount the boxes five feet above the ground with holes facing  east or southeast, away from the prevailing winds and the heat of the day. Styles vary, but it is best to find one that has been approved by the North American Bluebird Society, as these carry the specifications for bluebirds to thrive. In the Midwest, bluebirds usually raise two broods of between three and six young each summer, with  more hatchlings in the first brood than the second. 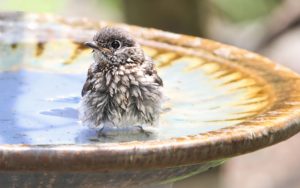 Because of the extensive system of bluebird trails across the United States, and the regular monitoring of the nest boxes which comprise them, much is known about the lives of bluebirds.  If you would like to learn more, many books on the subject are available. The North American Bluebird Society has a very informative web site at http://www.nabluebirdsociety.org.