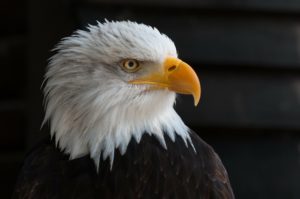 Image by Christoph from Pixabay

Bald Eagles live throughout a large part of North America, primarily in the U.S. and Canada, and are usually found near rivers and other bodies of water. They are opportunistic feeders and prefer to eat fresh fish. When fish are scarce, they will eat birds, mammals and carrion. 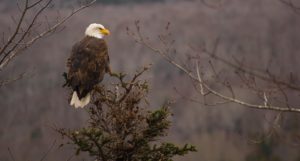 Image by Jan Tremmel from Pixabay

When hunting, Bald Eagles usually start from a high perch and glide down to catch their prey. They will strike from the air and are known to wade into shallow streams or rivers for fish. Occasionally, eagles are pulled into the water while trying to catch large fish. These birds are surprisingly good swimmers, using their wings to mimic a motion that is similar to the butterfly stroke. 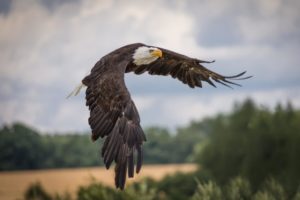 Image by Sven Lachmann from Pixabay

Although they usually hunt solo, Bald Eagles have been observed hunting in groups from time to time. When they do, one bird will chase prey towards its hunting partner. 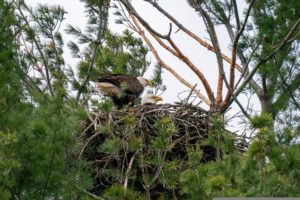 Image by Danawcac from Pixabay

The female usually lays two eggs, sometimes one to three. Male eagles help the females incubate the eggs, and the parents are very careful around the eggs while in the nest. They will even clench their toes to possibly prevent the eggs from being punctured by their talons.

Babies hatch in about 35 to 46 days and both parents care for the young until they leave the nest in 10 to 11 weeks. Young eagles will still be fed for a month after fledging. 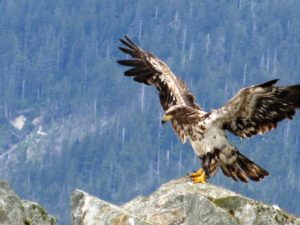 Image from PublicDomainPictures from Pixabay

Juveniles gradually spend time on their own away from their parents and learn to hunt by trial and error. They may eat a lot of carrion, especially fish, till they master hunting live food. Immature Bald Eagles have been known to explore vast areas for multiple years. Some Floridian young have been seen in Michigan, and some Californian young have gone as far north as Alaska.

Bald Eagles faced many perils in the 20th century, mostly due to human interactions. They have been on the ‘endangered species’ list and moved to the ‘threatened’ list. With breeding pair introductions in many states, their numbers have been increasing, but they still have not reached their pre-20th century estimated population.